As Tropical Storm Elsa rages across the Caribbean we revisit a conversation with climate change and disaster risk expert Kelli Armstrong. Start with the global pandemic, throw in a volcanic eruption and then add the Atlantic hurricane season – It’s near impossible to depart from the Caribbean’s vulnerability in any conversation of this nature. Natural disasters are not giving us space to recover so planning and preparation must be the order of the day. What goes into that planning? Lot’s of data, so we are grateful that people like Kelli are up to this task.

Kelli regales us with her early childhood experiences and love for the environment, her pursuit of environmental sciences and the academic determination and support which led to her current career. Disaster risk management is a community level effort as much as a national effort. We talk the importance of local practices for disaster-based preparedness as well as the critical importance of data collection to forecast based disaster planning. We get insights into regional approaches like the Caribbean Outlook Forum (CariCOF) which prepares forecasts for the region’s wet and dry seasons.

Adapting to climate change, preparing and responding to natural and non-natural disasters is an overwhelming effort. However the resilience of the region’s people is a refreshing reminder to keep moving forward. 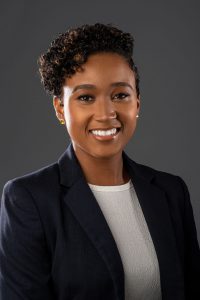 Kelli Ashley Armstrong, born and raised in New Providence, attended St. John’s College during her elementary years. When her parents moved to Grand Bahama, she attended Sunland Baptist Academy, where she completed her secondary education with honours in 2006.

Kelli returned to New Providence to study at The University of The Bahamas (UB) as a Chemistry major. In her second year, she was captivated with her Ecology class field trips and became involved with the Marine & Environmental Studies Institute at UB.

Kelli transferred her credits to Acadia University in Wolfville, Nova Scotia, Canada; where she completed her Bachelor of Science degree in Environmental Science, and her passion for sustainability blossomed. Kelli was one of two students invited to represent her University at the 2011 IMPACT! Youth Conference on Sustainability in Guelph, Ontario, Canada. She later became an awarded Environmental Science Students’ Organisation Executive and Student Representative Council Equity Officer; receiving the Ghandi and Acadia Students’ Union Leadership Awards in 2012.

Exactly one year after graduating from Acadia University, Kelli received a full scholarship for a Master of Arts degree in Climate and Society at Columbia University in the City of New York; which included a Graduate Research Assistant position with The Earth Institute to study forecast-based disaster preparedness in the Caribbean. Following completion of her studies, Kelli was retained as a Senior Research Staff Assistant to further develop applications for data and information she collected on climate and disaster risk management with the Financial Instruments Sector Team at the International Research Institute for Climate and Society (IRI) and the Center for Research on Environmental Decisions (CRED).

Kelli returned to New Providence again in 2015 and immediately began working with Caribbean Coastal Services Ltd. (CCS), where she conducted environmental assessments and coordinated teams for various technical consultancies. Of note, is the 2016 National Integrated Coastal Zone Management Policy Framework (ICZM) for The Bahamas, which Kelli executed as the Climate Change Adaptation and Disaster Risk Management Expert. In 2017, she became a registered Environmental Professional in training (EPt) with Environmental Careers Organization (ECO) Canada, specializing in Environmental Management. Kelli was promoted in 2020 to Project Manager for BRON Ltd. (parent company of CCS, ENCO International, and Atametrics), where she continues to support the environmental team, as well as lead climate risk and vulnerability assessments.

Earlier this year, Kelli was named a 2021 Climate Ambassador of the Global Youth Climate Network (GYCN). As Climate Ambassador for The Bahamas, she is dedicated to local climate action; raising awareness about climate change, impacts, and ways to reduce our carbon footprint.

In addition to spending quality time with her family, which includes her two-year old son, Kelli also enjoys music, dining, beaching, and travelling with her friends.