Representing the country known as the la Perle des Antilles (Pearl of the Antilles), Haitian Scholar and Environmental Management major, Daphning Pierre highlights critical issues for concern in the midst of this outbreak. In this conversation Daphning guides us through the daily experiences of Haitians contrasting the global buzz of the coronavirus with the lack of information at home.  Covid-19 is taking to task all global health systems but against the challenges such as water scarcity and sanitation, protecting the population of approximately 17 million will be an arduous task. Daphning, advocates for more effective action from her government in keeping the situation contained especially considering the constraints in providing safety nets for those who cannot work from home.

The figures and scenarios reported within the episodes were based on time of recording as at March 22-23,2020* 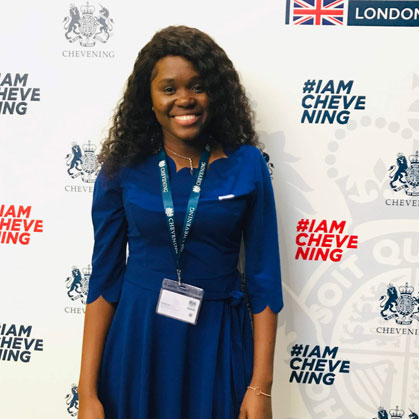 Daphning Pierre is a Chevening Scholar who is pursuing a Master of Science (MSc) in environmental management at the University of the West of England (UWE) in Bristol, United Kingdom (UK). A Haiti-national, she is a talented young woman with at least five years experiences both in profit and non-profit organisations in Haiti. From 2017 to 2019, Daphing Pierre worked as an environmental engineer at Brasserie Nationale d’Haiti S.A (BRANA), a subsidiary of the HEINEKEN group. She contributed to building up an environmental management system, launching a water awareness campaign to enlighten her peers on water conservation in the company. She later became the youngest sustainability manager in BRANA, working closely with the management team to elaborate strategy and policy to tackle plastic pollution throughout Haiti.

Daphning Pierre is also an active member of the Haitian community. In 2012, she co-founded ACTIVEH (Action towards Initiative and Volunteering for Education in Haiti) and in 2016, World Merit Haiti where she stands as the Vice-president until September 2019. These two groups went on to become two of the largest volunteering communities in Haiti, where citizens are learning how to become marketable in the workforce. Standing out for her academic achievement, she received the Haitian Education and Leadership Program scholarship and obtained a Bachelor of Science in industrial engineering at University Quisqueya in 2017. She is keen on singing, human rights, water governance, urban development & policy, carbon management and environmental sustainability.