Episode 2: Saving the environment is sexy! Just ask this supermom!

W e checked her Instagram, but our conversation verified she talks the talk and walks the walk. This mother, wife, businesswoman and earth champion, Yhordanka Akwanza shows us how simple it is to life the sustainable lifestyle.  While tending to her youngest and supervising more climate-smart home renovations this episode was a live demonstration of how the Cuban American-Jamaican maintains her duty to the earth. In this episode she details how she engenders a love for the environment in her children, bring awareness in compelling forms via social media operates a self-sustaining Air BnB in one of Jamaica’s jewel parishes and ensures that her 18-store eyewear franchise, Eyeland Eyewear capitalizes on renewable energy to lower overheads and reduce their carbon footprint. 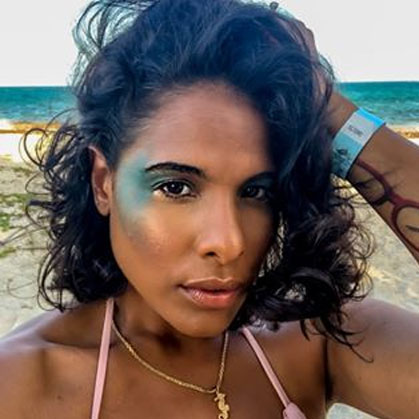 Yhordanka Akwanza is the Co-Founder and COO of Eyeland Eyewear LTD. A leading eyecare company in Jamaica with locations islandwide. Born in Cuba where she trained as a professional dancer, she migrated to Jamaica in 2003 after marrying her husband and now business partner Ketao Akwanza.

Yhordanka taught herself to read, write and speak English as well as sales, computer and business skills. After exploring the dance world in Jamaica during her first year on the island she decided to switch careers and dedicate entirely to her husband’s family business. She managed the first Eyeland Eyewear store and later managed their second location. In 2006 she focused on customer relations and purchases for the three locations.

In 2016 after a short-lived merger of many family optical stores, she became the COO of eight Eyeland Eyewear stores. Since then the company has grown to seventeen locations and a head office with over sixty employees. Yhordanka a jack of all trades ensures that the team is well trained, the company is marketed, the stores are furnished with the best quality and the best styles in eyewear and guaranteed customers service.

She is the mother of three boys ages: seven, six and a newborn. She is a do it yourselfer, who enjoys housework and taking care of her family.

She has a passion for style and sharing creative poses on Instagram. She also uses this platform to bring awareness to new upcoming entrepreneurs and their businesses as well as social and environmental issues.   Her style has been published in international magazine, In Style magazine and National News Papers.

Yhordanka is currently working with her husband on creating more sustainable living solutions for Jamaicans through renewable energy and farming.